A drama where 4 aliens try to fit in Earth, living as humans.

I signed up for a wacky, short drama thinking that it was 12 fun episodes of 20 minutes each, just like the typical bad-but-hilarious self-produced dramas by China’s online network.. I was wrong. This turned out to be a 12-episode drama with 45 minutes each… And to make things worse, it’s only season 1 with a cliff hanger ending! How annoying!!

I thought this was some funny parody of ‘You Who Came From The Stars’ but as it turns out, it’s an adaption of a novel (我就是妖怪 by 张小花). If I knew, I wouldn’t have started on it. Novels-based dramas (especially short ones!) usually turns out a mess and it would be more enjoyable if I had actually read the novel first but it’s too tedious and too much effort to do that much ‘preparation’ just to watch a drama to kill some time. 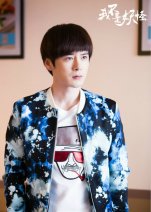 Even though this drama does not make logical sense, is not downright in-your-face funny but it was a light and enjoyable ride. The premise that the main characters are ‘baddies’ who just want to live life as normal good human beings was pretty refreshing. It was a breeze and despite the lack of development, I love the characters and all the ‘awwwwwh’ moments. I am undecided whether I liked the actors or not but they have been giving off a lot of good vibes. I enjoyed the show and would watch the second season.

If anyone is interested, this drama aired on iQiyi on October 2016 and stars Zhang Yu Jian, Liu Dong Qin, Shu Ashin and Wang Yu as the 4 main ‘aliens’. Other main cast includes You Wu and Xiao Yan.