Let’s take a break from my “My Best Ex-Boyfriend” episode recaps first and discuss some real-life news about our beloved cast members! This is like a special edition of my favorite Weibo round-up because all of the bits here about the actors and actresses are just from Weibo 😉

I’m totally on board this ship if ever there’s a chance that it’ll actually come true!

This is obviously a typical scenario in dramaland led by delusional fans (I’m one of them!). Fans become so invested in a pairing so they make an item out of it. It may be annoying for some because why would you interfere in an actor/actress’ private life?! But I guess that’s just how it goes in the world of entertainment and fandoms.

“My Best Ex-Boyfriend” has broken the 500 million record of viewers in one night!!! It even beat the usually top-rating dramas like “The Journey of Flower” top-billed by Zhao Liying and Wallace Huo, “Diamond Lovers” with Rain and Tiffany Tang, and “Whirlwind Girl” with Yang Yang and Chen Xiang. And because of that…

Maggie Jiang (as Fangsi) decided to post a picture of her and Jerry Yan (as Tang) to celebrate their half a billion success! As an avid watcher and recapper of this drama + Jerry Yan fan, their success has also made me so proud!

This is why people also thought that Maggie has moved on pretty quickly after breaking things off with his famous ex-boyfriend actor Hu Ge. I actually feel bad for her because I feel like she didn’t have any ill intentions on posting the photo with Jerry because it was just obviously a form of fan service. Seeing her post actually made me so happy because ever since they started filming a drama, I have always wanted her to share a photo with Jerry. Wish granted yay! 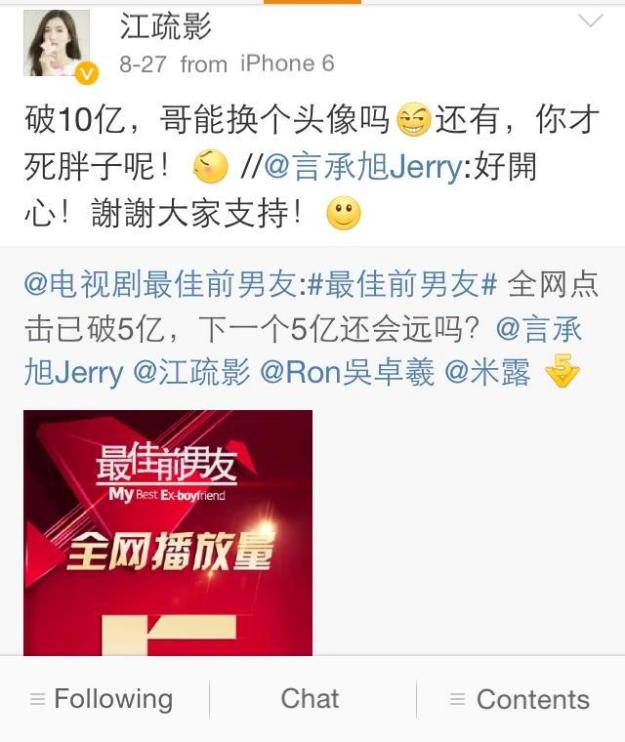 There are only two reasons for Jerry Yan going online on Weibo:

1.) Indirectly tell fans that he’s still pretty much active in the entertainment industry by telling them to support his latest project.

2.) Expression of his gratitude to all of the fans who keep supporting him.

Because of the breaking news of half a billion, of course our man just had to go online! Maggie replied to his Weibo by telling him that they should post another picture if they hit the one billion mark (*crossing my fingers*). She also called him “dead fat” and I’m guessing that they were still acting as Fangsi and Tang. How adorable! Fans even commented that they should post a kissing photo if they hit the one billion mark LOL. Sounds ridiculous but I’m definitely game with that too haha!

Here’s more of Maggie Jiang being cute on Weibo:

“Why do people always hurt me? People are also very concerned with image”. With Jerry/Tang always torturing her in the drama, and Ron/Haoran dropping her into a fountain, it sucks to be Maggie/Fangsi sometimes too haha!

“This is the former, this is the current”. Her caption when she posted a photo with Viola Mi. Aww my girls! Hope they keep posting more photos from the drama (set or any occasion) please ❤ 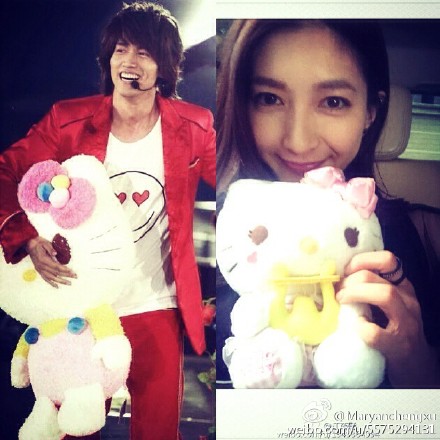 Ending this post with a Hello Kitty parallel of Maggie and Jerry that I made a few months ago that the “My Best Ex-Boyfriend” Weibo account reposted. Of course I fangirled so hard because both Maggie and Jerry are following the account as well haha! As of now, we don’t have enough evidence to say that our beloved Tang and Fangsi’s relationship is actually happening in real life but I wouldn’t mind if it does 😉 What can you say about this possible pairing? Yay or Nay? Hope to see your comments below!