Hi all, I have joined the English translation team for the Chinese novel Counter attack: Falling in Love with a Rival《逆袭》 by Chai Jidan 柴鸡蛋and I will be posting my translations here. Check out my review here and you can visit the facebook page for the complete translations 🙂

Warning: M18. Might contain explicit scenes of a homosexual couple

“Hey, there will be a patient coming soon, go get dressed quickly.”

“No hurries,” Wu Suowei, used to being drabby, replied, “I’m going to shower now.”
Jiang Xiaoshuai stared at Wu Suowei with interest, “I realise you like wearing this set of clothes a lot.”
Wu Suowei casually picked his nose and answered, “Material used in the past is better – pure cotton – It’s much more comfortable.”

Just as he finished speaking, the sound of a car braking travelled over. Wu Suowei glanced out and in an instant, the finger in his nostril froze…. Chi Cheng’s car!

“Damn, damn, damn…..” Wu Suowei panicked, “Why is he here so fast?” Wu Suowei haven’t dressed up yet.

Chi Cheng slowly opened his car door, picked up Xiao Cu Bao and got down the car.

“I’m going to the toilet to hide, tell him I’m not here when he comes over,” Wu Suowei slid into the toilet and locked the door from the inside.

As Chi Cheng stepped into through the door, Jiang Xiaoshuai pretended not to know him and looked at him with a friendly smile, “Are you feeling unwell?”

Chi Cheng did not beat around the bush, “Where is Wu Suowei?”

“Oh, he just stepped out. Why are you looking for him?”

The sharp-eyed Chi Cheng noticed movements in the toilet and strode straight towards it without saying anything. The door did not open the first time he pushed it. At the second push, the lock broke from inside.

Jiang Xiaoshuai swallowed his saliva, damn, this buddy here is too… handsome.

Wu Suowei was leaning against the door, listening to the movements outside. Without warning, there was a sharp pain and half of his body became numb. Following that, there was the sound of something breaking and Chi Cheng’s face appeared in his vision.

The yellowed singlet complete with a few holes and what’s more outstanding was the big flower prints underpants with thread hinging loosely.

Chi Cheng basked in the view of Wu Suowei’s appearance.

Two seconds later, the toilet was filled with Wu Suowei’s shouting, “Is there anyone who does things like you? Goddamit, this is the toilet, not the living room, can you come in as you wish? What if someone is shitting here? What if it’s not me here, but it was a woman?…”

Wu Suowei continued yakking for a long while before realising Chi Cheng is not even bothering to listen — his eyes were just focussed on his big floral underpants and his gaze were full of evil intention.

Image… Pay attention to image... Wu Suowei suddenly realised and used his hands to rub between his eyebrows. When he raised his head up again, he let out a calm smile and said, “Please go out, I want to shower.”

Chi Cheng, “Make it quick. I’ll be waiting outside.”

Ten minutes later, Wu Suowei came out of the toilet dressed neatly and sat opposite of Chi Cheng. He lit up a cigarette and casually asked, “How can I help you?”

Damn….. Wu Suowei paled. How did I forget this? Controlling his awkwardness, Wu Suowei calmly looked at Chi Cheng again.

“Why are you looking for me when it is not feeling well? This is a clinic, not a veterinarian. Furthermore, I’m not a doctor.”

How does it involve my little brother again?

Chi Cheng saw Wu Suowei’s doubt and patiently explained, “You are Da Bao, it is Er Bao. If it is not your little brother, whose little brother is it?”

Chi Cheng added on, “Furthermore, you owe me so much. Isn’t it time to pay today?”

“What do I owe you?” Wu Suowei scrunched his brows and asked.

Damn your grandmother! Wu Suowei was driven crazy on the inside. That was what your Lord, me, awarded you. How did it become what I owe you?

Of course, his face was still calm. He showed his empty palms to Chi Cheng and made it clear, “No more.”

Wu Suowei controlled the anger burning in his heart and coldly replied, “No money.”

Chi Cheng took out a few red notes[6] from his wallet and gave it to Wu Suowei.

Wu Suowei graciously took over the money and stuffed it in his pocket before faintly replying with two words.

[1]Big Baby, Second Baby (大宝二宝 da bao, er bao) – These are basically pet names often used for one’s children as ‘bao’ can mean ‘Treasure'(as in bao bei) or ‘Baby’ (as in Bao Bao). There is also a hierarchy element in here. 大宝(Da Bao) basically means 1st child/baby (big baby) and 二宝 (Er Bao) means 2nd child/baby.
[2]我家…(name) – direct trans would be ‘my house/house’s…(name).’ It’s use to show something precious or dear to heart or saying a ….(name) is their family member. Jidan wrote我家二宝 (direct trans: My house’s Er Bao) which translated to my Er Bao.
[3]Da Bao is also the brand of the cream that Wu Suowei uses and offered to Chi Cheng in chapter 37. Chi Cheng was very amused and took to calling Wu Suowei ‘Da Bao’ from then on.

[4]In Chinese, a man’s private part is sometimes also referred as his ‘little brother’. This is meant to be a pun. 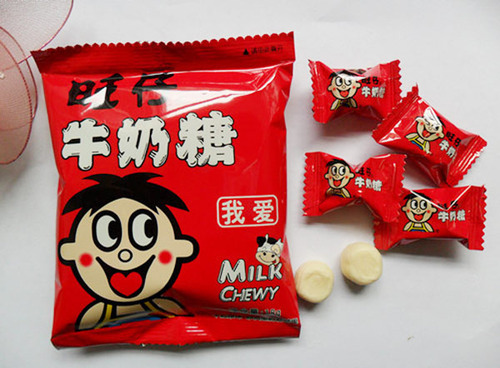 [5]All these are common snacks found in China. Wangzai is a snack brand from Taiwan, famous for its rice crackers and milk drink. Personally love it.

Haha! I love Wu Suowei’s character. He is just so funny. A little naggy loser trying to be cool but he’s never going to succeed. Despite that, he is so endearing and lovable. That last sentence totally cracked me up. That’s a higher level above being a penny-pincher – it’s skills and smarts.