Sorry it took me forever before posting another Movie Monday! It’s all piling up now as I’ve been watching a lot of movies recently. As the title states, I’ll be reviewing 5 movies which fall under the Action genre. It’s also part 1 out of an uncertain number because only time can tell how many action films I’d be watching throughout the years haha!

Trust me, I’m no action fan because I’m all for romance, comedy, melodrama, etc. and basically not action at all but I managed to enjoy these titles. After all, what is life without any action? 😉

Just like how my regular Movie Monday should work, I have the trailer embed in its title (all with English subs except “Crimes of Passion”), story in a nutshell, why watch it, and my ratings together with other critics (if available).

Let me start this post with the film in which my screenshot above belonged to:

In a nutshell: One would think that this is the sequel to the famous 2009 Taiwanese drama, “Black & White’ but it definitely isn’t one. It’s more of a prequel, a time when Ying Xiong (Mark Chao) existed without Pi Zi (played by Vic Zhou). but paired up with another unlikely partner (played by Huang Bo). A gangster + a cop who only sees black & white.  Interesting combination, eh?

Why Watch It: The Taiwanese entertainment industry isn’t really known for their action movies, they’re mostly known for silly rom-coms and dramas. However, this was a big-budget production and the story had depth in it. It was a decent film for someone like me who’s a huge fan of the “Black & White” drama. It has been said again and again but let me say it still, how could they have made a film without Vic Zhou’s amazing character in the drama?!! Well, it was him who didn’t want to deal with anything related to this drama anymore so the production crew just had to make do with what they have . I’m not sure how the watching experience would be if you didn’t watch the drama but I guess it would be a better one because you didn’t have any expectations. If you want to see a heart-stopping Taiwanese action film then this is for you!

Ratings: I gave it a 7.5/10 while IMDb gave it a 6.3/10. Even if I was happy that Angelababy was here,  I didn’t quite get what her role was trying to do in this film. I felt she even disappeared into thin air towards the end of the story. Really weak development of characters and story which is definitely not an element of the drama (see my review here). It still had the complexity of the drama but still failed to deliver because it could have left a lot of people confused. On the brighter side, I was smiling like an idiot because they kept the OSTs from the drama and even almost everyone in the police station found in the drama. It also affirmed my love for Mark Chao aaahh my hero! So it turns out that he has always been majorly heroic even before the drama 😉

In a nutshell: It started right where the first movie left us. Hero (Mark Chao) being hero but has now found himself with a new partner in Lin Geng Xin’s geeky cop character. There’s this massive virus attack set to attack the fictional Harbour City. How will these two solve the puzzle? This is also when Janine Chang’s character comes in before the drama’s setting.

Why Watch It: Common sense — why not watch the sequel if you’ve already watched the first movie, right? 😉 Aside from that, this installment made more B&W drama fans happy as Xiu Jie Kai and Janine Chang reprised their roles from the drama.
Ratings: I gave it a 7/10 and IMDb gave it a 6/10. Yes! We both gave lower scores compared to the first movie. I was very excited to watch it because I saw some people’s reviews saying that it’s way better than the first one. Well, that wasn’t the case for me. I found this to be less thrilling which just sucks because I was looking forward to seeing Janine Chang and Lin Gen Xin here. I felt that it had a lot of plot holes not just regarding the film but also in terms of connecting it to the drama given that this is a sequel of a prequel (what a mouthful).

In a nutshell: This film is literally a mash-up of Chinese history and a mythical tale. Set during the Qing dynasty, the people of China have become cautious of a mysterious sea creature who would randomly attack and destroy their towns/cities. 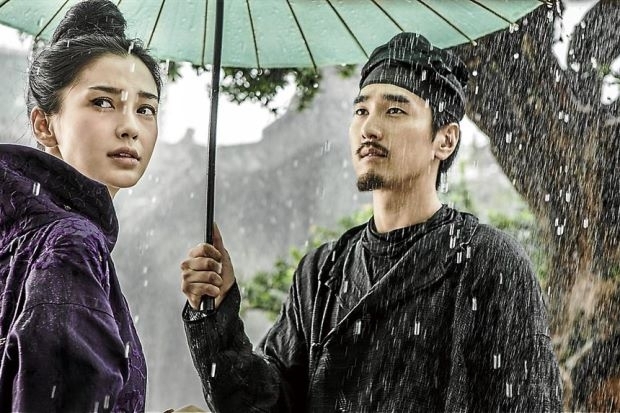 Why Watch It:  Angelababy was a royal courtesan and she was everyone’s favorite. They love her so much that people would actually fight over because she was the most beautiful courtesan in town (well, she really is beautiful!) What really made me enjoy in this movie was Lin Geng Xin’s (I just love him!) awkwardness around her. I think the Kdrama fans out there would also be glad to know (maybe you know already actually) that Kim Bum also starred in this movie too and he actually had great chemistry with Angelababy here!
Ratings: I gave it 8/10 while Rotten Tomatoes gave it 50% with IMDb giving it a 6.5/10. Why 8, Marian, why?? HAHA. I have no idea but this was one of the first Chinese movies that I’ve watched and so I was pretty much easier to please (not that I’m not even until now lol). This was Angelababy and Mark Chao’s 2nd collaboration after my forever favorite film, First Time, but my reaction towards this film is definitely the opposite of what I felt when I watched First Time. I actually fell asleep when I was watching this, but don’t get me wrong, I don’t think it was that bad but maybe I was just too sleepy and that the film couldn’t sustain my attention anymore (lol). It’s definitely an action film without the guns but more on fantasy and martial arts.

In a nutshell: Reel & real-life (married!) couple is stuck in a huge criminal case as cops involving the character of Korean actor Jae Hee.

Why Watch It:  Just to see the on-screen chemistry of Huang Xiaoming and Angelababy was my motivation for watching it and nothing else to be honest.
Ratings: I gave it 8/10 (why, Marian, why? HAHA) while IMDb gave it 5/10 . Same reason with the film above. Right amount of scheming and investigating but a pretty forgettable film. The story was a bit disappointing, I wish that they just made the story something like “Mr & Mrs. Smith” for this real-life couple. I think that the film creators wasted so much potential for these two to show their chemistry onscreen since the story focused on Angelababy’s character and the other actor instead. Though it was still great to see Angelababy being a bad-ass detective or agent of some sort.

In a nutshell: If you’re a fan of both the anime and manga then there should be no introduction needed for you. But for those who don’t know, Lupin the Third is the world’s greatest thief. Why the greatest? Well, everyone knows that he’s a thief and he steals whichever’s the most precious object out there.

Why Watch It: If “Black & White” is my favorite action drama, then this is my favorite action film! I watched the anime when I was a kid and my only Japanese love, Shun Oguri, embodied Lupin (except that Shun’s way good-looking)  in this live-action adaptation. Never thought I would enjoy an action film until I watched this. The team work in creating a heist was beyond enjoyable to see which makes it such a good action film. Added bonus is the amazing bromance chemistry of my Jerry and Shun *heart eyes*.
Ratings: Remind me not to give reviews on any work of Jerry Yan anymore because it has bias written all over it… I gave it 9.5/10 (you’re crazy, Marian) and IMDb gave it 5.5/10. To be fair, I watched this on the first day of showing in the cinemas just because I knew that Jerry was going to be in it. I was a bit scared that it would be a waste of my money if he were going to appear in just a small portion of the airtime. Lo and behold! The sum of his parts can already be equivalent to being another male lead here. However, one downside for me was the ending (ugh) which I definitely won’t say here. Also, I just wish that they used Nihonggo more instead of being a multi-language film as the actors looked a bit struggling with the dialogues. Though it’s still okay because I was still able to hear Jerry & Shun speak in English and Jerry showing off his Nihonggo skills 😉

So how do you love my 2nd Movie Monday and 1st one for “Lights, Camera, ACTION”?? 😀 Even if I’ll be lessening my drama-blogging and drama-watching, hope I can still regularly posts like Movie Monday 😉

Hope I can see you in the comments section below!