Hopefully my writing streak won’t break so soon because I’ve been watching such beautiful movies lately. Before I go on full blast movie review mode, I’m beyond happy to share with you that I passed my board exams! Yes, that exam which made me disappear for such a long time into dramaland 😀

This will be my first time to write a review on a Japanese anime film and possibly a start of a series of reviews especially focusing on Studio Ghibli films. For every review that I will be doing, I will not focus on recapping the story or scenes because you can just look it up everywhere. Instead, it will comprise the  following sections: story, characters, rewatch value, and overall rating.  So feel free to read more on how/why “Grave of the Fireflies” just ruined me into pieces.

Heart-wrenching, life-changing, and haunting. These are the three words that I used to describe Studio Ghibli Isao Takahata’s “Grave of the Fireflies” based on a semi-autobiographical novel by Nosaka Akiyuki. It had such a lasting impact that I found myself staring into blank space thinking about it at work even a few days after watching it. I could blame myself too for watching it twice in a row because I watched it again when my sister decided to watch it after she saw how affected I was.

STORY IN A NUTSHELL:

Set during the last few months of World War II, Seita and his younger sister Setsuko had to find all possible ways to survive in a time where there was almost nothing already.

There was just an amazing depiction of the characters in this film. Seita is probably the most ideal big brother that you could only wish for. If I were in his situation, I would just probably become irritated that I was in charge of taking care of a younger sibling while finding means to survive. While watching the film, you would notice that he remained strong all throughout despite all the obstacles that him and his sister were facing.

Setsuko is your typical innocent and joyful child who should not be experiencing the atrocities of war. The screencap below is probably the most heartbreaking scene that I have ever watched in a film. It also revealed the true feelings of our characters and would just leave you in awe that these animated characters are indeed humans.

Will I watch it again? Like I said earlier, I watched it twice in a row and I’m definitely going to do so in the future (yup, I’m a dramasochist). According to my beloved king critic, Roger Ebert, “Grave of the Fireflies” is an emotional experience so powerful that it forces a rethinking of animation. Yes, it’s a cartoon, and the kids have eyes like saucers, but it belongs on any list of the greatest war films ever made.

If you don’t trust me, then you should trust what Mr. Ebert had said about it. Like him, I also included this in the greatest films that I’ve ever watched (personal rating of 11/10). All praises for this film and I can only hope that I could get to watch more movies as powerful and with a lasting impact as this. 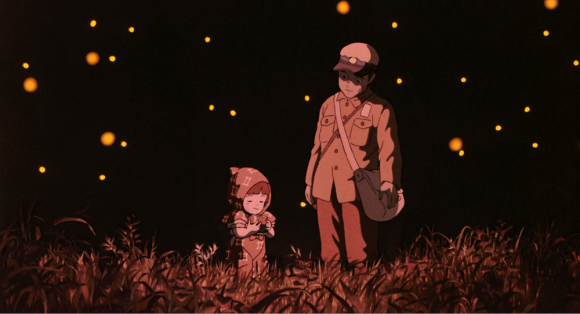 On a sidenote, I just ordered some Grave of the Fireflies merchandise from Amazon and I’ll definitely share it with you here once I get to receive them! Have you watched this movie yet? What are your thoughts about it? Hope I can see them below 🙂 and judging from this very brief review that I made, should I still keep writing some for all the other Studio Ghibli films that I’ve watched? Please do let me know.