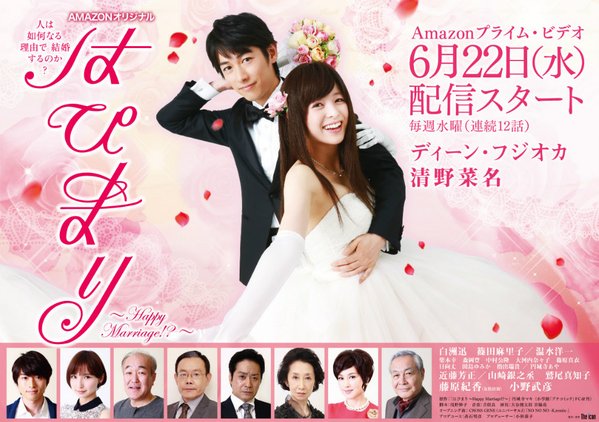 Title: Hapimari: Happy Marriage!?
Native Title: はぴまり
Country of Origin: Japan
Airing Date: June 22, 2016-August 31, 2016
Episodes: 12
Where to watch: I watch it on kissasian.com but only 8 episodes have been uploaded as of the moment

Hello, dramaland! I’m back for good 😉 Going to write about this new J-drama that I’ve just discovered after attempting to watch LoveO2O as my post-exams reward but all drama sites didn’t want me to watch it *cries* so I ended up watching “Happy Marriage” and it’s currently giving me life! I may have already watched a few J-dramas in the past but it will be my first time to write about one in full length. Read more to find out.

This drama is based on a famous manga and I really have no idea about the manga so I apologize that I won’t be able to have a comparison of the two. Although I think it’s an advantage too because I’m simply reviewing the drama on its own without any other factors affecting my judgment. I just finished watching the 4th episode so my views about this drama might still change given that I’ll just be writing about my first impressions. I also hope that I’m not spoiling anything here since I’m only writing about all that I can without revealing too much about the story.

Seino Nana plays Takanashi Chiwa, an ordinary hardworking girl who does nothing but work her ass off to save her troublesome father from his debts from gambling and other anomalous transactions. Aside from her day job of being a staff at a home appliances store, she works as a hostess/entertainer at a cabaret place. For our male lead, Dean Fujioka plays Mamiya Hokuto, a successor of  Mamiya Holdings specifically managing a consultancy firm. Hokuto got to meet the female lead when he was chilling in the cabaret bar while Chiwa was entertaining a constant guest. He saw Chiwa being harassed by the guest and pulled her out so he could “save” her.

She didn’t take it well and became furious about what Hokuto did and stormed out of the bar and since she was fired anyway. If this was not a drama, of course we could just end this situation and have our characters moved on to their own lives. The next day, Hokuto looked for Chiwa to return her handkerchief in the department store where she works at. 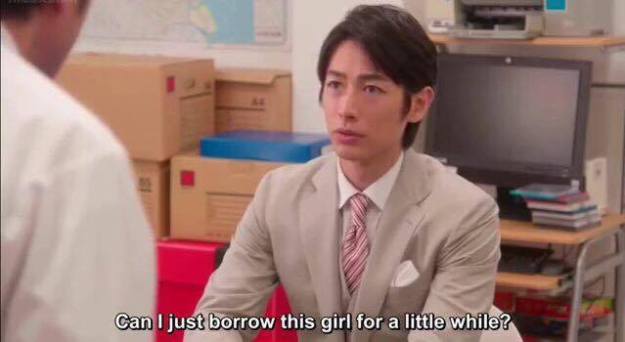 For some reason, he ends up asking Chiwa to marry him. Yup, that fast! All in a 35-minute episode (every episode is as short as that by the way). 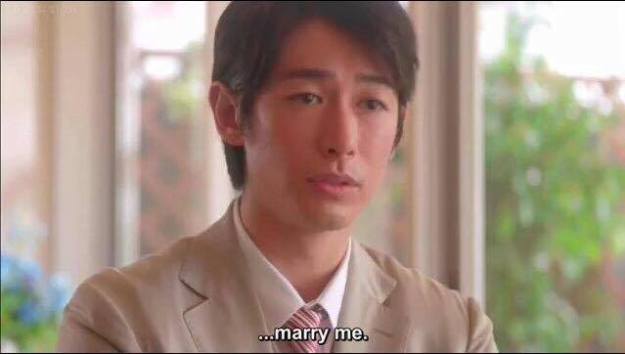 I don’t know about you but I would say yes in a heartbeat if it’s Dean Fujioka who will randomly ask me… HAHA! I’m kidding (or not…). Like any girl’s reaction, why would she say yes if your husband-to-be is a complete stranger?! Chiwa’s just like any other girl who associates love with marriage which unfortunately isn’t the case for Hokuto. 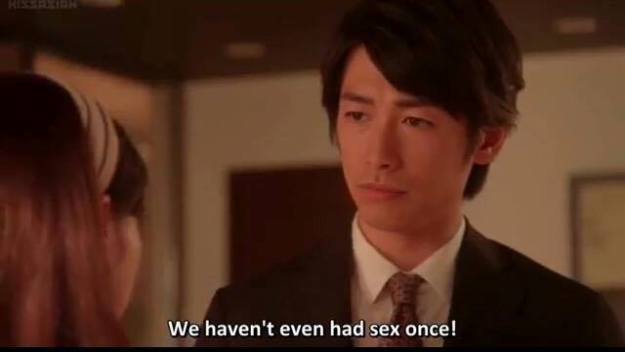 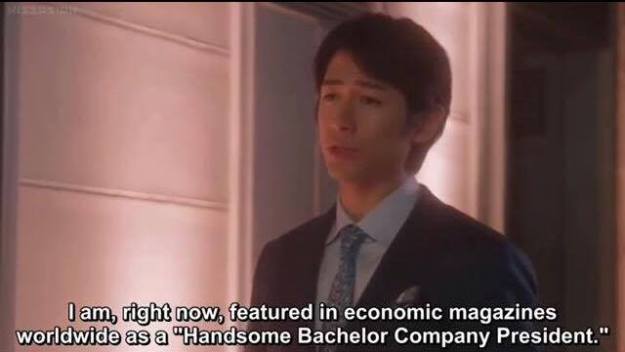 As much as Chiwa would love to tell everyone that she’s married to someone whose annual income is 500,000, she can’t divulge the information yet and Hokuto will be the one to formally announce it.

I ended the 4th episode with an idiot-looking smile because the chemistry is too real! 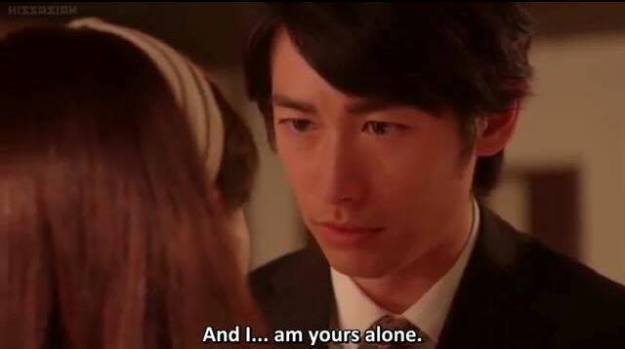 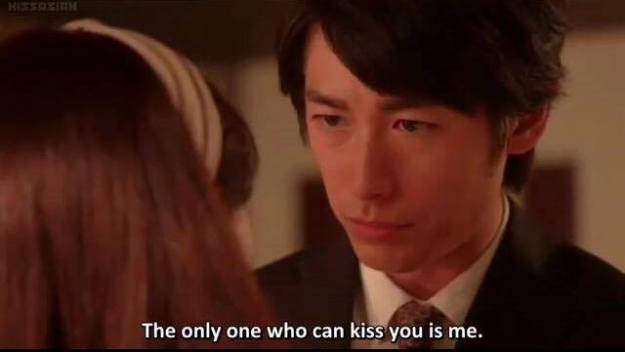 Like really… I also can’t believe that Seino Nana is just 21 years old while Dean Fujioka is already 36 years old! The age difference gives me so much hope as I’m only turning 21 and all my crushes are in their 30s already… okay, my thoughts are becoming irrelevant now haha!

I have to admit, the music isn’t very impressive and I even find the opening song really annoying lol. Although I have a strong inkling that I’ll end up loving it because of the good memories that I’m sure this drama will bring. Nothing special about the cinematography because I noticed that J-dramas love to keep it simple and just focus on the characters instead of dwelling on the background. I would love to see a J-drama highlighting the setting though just like some Taiwanese & Chinese dramas because Japan is one beautiful country! 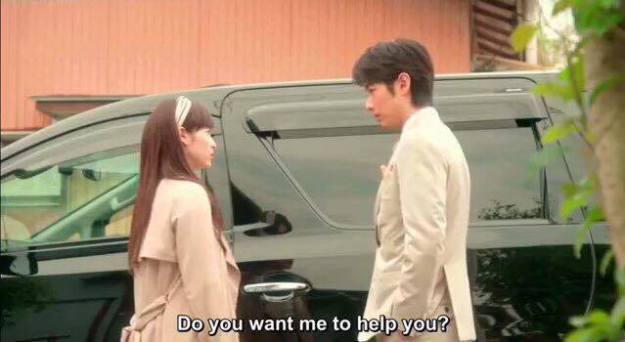 It somehow reminds me of my favorite C-drama, “Boss & Me” because of Hokuto’s similarity with Feng Teng and also because of the chemistry. I couldn’t help but feel kilig (this is a Filipino word with no translation and I really don’t know how to explain it but try Googling it haha!) with every episode.

We finally get to watch Dean Fujioka in a Japanese drama and in a lead role too *squeals*. For those of you who don’t know him, he’s a Japanese actor whose works were mostly in Taiwanese dramas and films. I watched him first in “Corner with Love” starring Barbie Hsu & Show Luo and I must admit that I didn’t like him back then. I started to love him when he was the only reason for me to keep watching “Just You” aka one of the most horrible and overrated dramas I’ve ever watched lol.

Unlike most people, I rarely get second male lead syndrome but this drama is giving me some symptoms of the syndrome because Shirasu Jin’s Yagami is just the cutest *_* too bad I can’t find any picture of him in the drama but you should just watch it for yourself 😉 and I love how his relationship with Chiwa will just make Hokuto a jealous ball of fury hihi

I know I said it a lot of times already but despite its amounts of cliche drama tropes, I recommend that you watch it especially if you’re like me who’s not in a mood to watch heavy-themed dramas (how could I after spending two whole days answering killer board exams haha!). It’s light, fluffy, and a no-brainer! 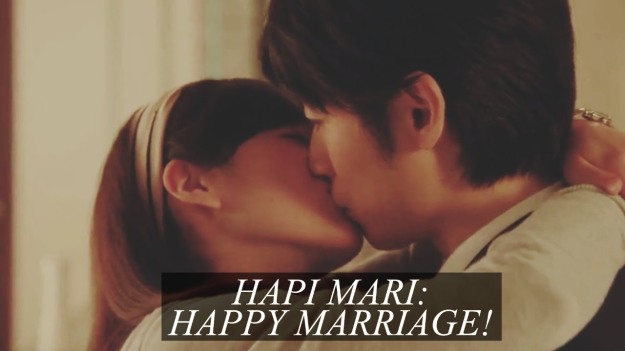