This is another special edition of my usual Weibo Updates/Round-Ups. It’s been a pretty busy week but it won’t stop me from writing about China’s biggest wedding of the year! How can I resist posting about this when both the groom and bride are just beyond perfect as themselves and for each other? 😀

Angelababy and Xiaoming are definitely #couplegoals

In this post, I have compiled various Weibo posts from celebrity well-wishers (some went, some couldn’t) of this perfect couple who got married last October 8 in Shanghai in front of approximately 2,000 people! Read more to be in the know 😀 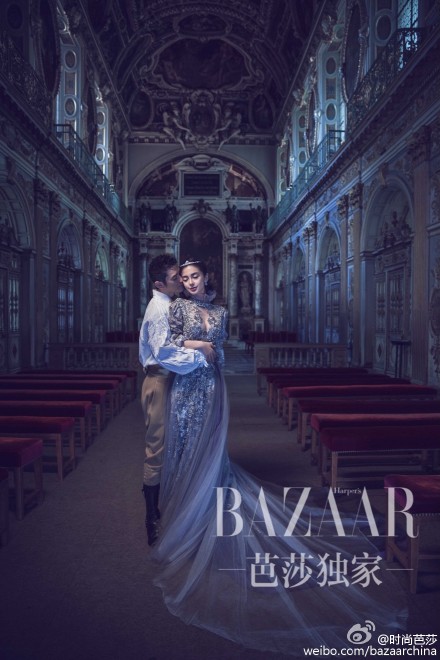 Famous Chinese photographer Chen Man was the one who took this beautiful couple’s pre-wedding photos in France. She sends a congratulatory message to them of course while subtly promoting that Harper’s Bazaar China will be releasing their November issue with these two as their main feature. I wish I can grab a copy!

I was actually wondering why Dee Hsu (better known as Xiao S) said “CH wedding” when it was supposed to be AH (Angela and Huang) but I guess it was just a typo. Her caption was really funny because she said that among the number of stars who went, she was definitely the second most beautiful next to the bride. She said that the ranking of the stars was determined by Ms. Xu Xindi (aka her LOL). Aside from some people on Weibo  making fun of her typo, her cute fans told her that she was still #1, and not the bride!  HAHA!

Xiao S came with her husband as she hosted the event with her Kang Xi Lai Le co-host, Kang Yong Cai as seen in the photo above. Seeing Xiao S made me happy but too bad her older sister, Da S (Barbie) couldn’t make it. I was expecting her to come knowing that she has remained in touch with Xiaoming who was one of her male leads in the 2010 TW-drama, “Summer’s Desire”.

We move on to another mere well-wisher who also didn’t make it (when I was super expecting!!).

In an alternate universe, Angelababy can actually get married with Eddie Peng. I ship these two but not actually enough to be an immature fan and say that I’m not happy for the bride. It’s just that these two actually introduced me to the world of Chinese movies with “Love You You” being my first one. That movie was not only successful in introducing me to a whole new world, but it was also responsible for my love for Angelabaobei (as I fondly call her) and for Eddie of course.

Since he couldn’t attend her friend’s wedding, maybe being the bride isn’t a bad idea… haha!

I’m not the only one who loved them together because after the success of “Love You You”, they were again starring in movies one after another such as “Tai Chi Zero”, “Tai Chi Hero”, and last year’s “Rise of the Legend”. They’re even Adidas Neo’s endorsers and their photos for the campaign are just my faves! I guess Eddie was just too busy but seeing his post made me happy with the matching lyrics to “aahhh fantastic baby!” Adorbs! 😀

Speaking of Adidas, Fan Bingbing is one of their endorsers as well. And guess what, she couldn’t make it as well (WHAT.). I was actually  hoping for a Fan Bingbing and Angelababy selfie to happen just because I call them as China’s Queens/Goddesses but even Bingbing couldn’t make it happen because of work commitment. Really sad! 😦

Huang Xiaoming was FBB’s male lead in the 2014 Chinese film, “The White-Haired Witch of the Lunar Kingdom” while she guest starred in “Hurry Up, Brother!” Season 2 in which Angela’s a regular cast of. The couple’s really close to her that their wedding announcement was actually what convinced her to announce and publicize her relationship with Li Chen who happens to be a regular cast of “Hurry Up” as well! She was rumored to be one of the bridesmaids but I guess it’s true except that she just couldn’t make it. In her Weibo, she apologized for not being able to come but she promised to give them a big amount in the red envelope (a famous Chinese wedding tradition).

Enough of those who couldn’t make it because there are still lots of interesting ones who actually came to give their best wishes to the royal couple. This only means one thing: pictures from the event itself yay!

Speaking of bridesmaid, let’s talk about the bridesmaids who actually came: Li Bingbing and Ni Ni! 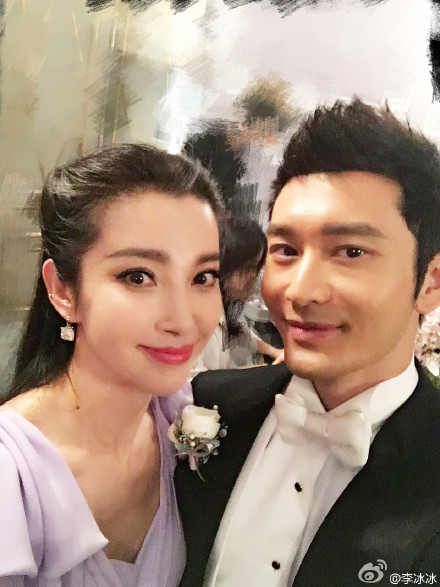 Forgive me for not knowing that these two are actually long-time friends! Li Bingbing was so cute in her Weibo by saying that she was moved to tears. She said that this was her last intimate photo taken with Xiaoming before he got married. I’m really curious to know what she made Xiaoming do in order for him to be able to pick up Angelabaobei on their wedding day which is a usual Chinese wedding tradition. She promised everyone that she prepared a very extreme challenge so I hope someone can tell me what she made him do 😀 haha!

What Oscars selfie? This AH wedding selfie is just one of the best!

Just like the bride, Ni Ni loves cats with her Instagram username as @captainmiao… if you still didn’t get a hint, I don’t even know haha! When I first heard the rumor that she was going to be one of the bridesmaids, it actually made me wonder if she and AB have always been close or if it was because of  the recent Chinese remake of “Bride Wars” with the two of them who headlined it. I just recently finished watching that movie which had a surprise cameo in the first few seconds of the film. I won’t say who it was just in case you still don’t know but it was definitely a foreshadowing of this event. Okay, you caught me. Way too obvious clue haha! 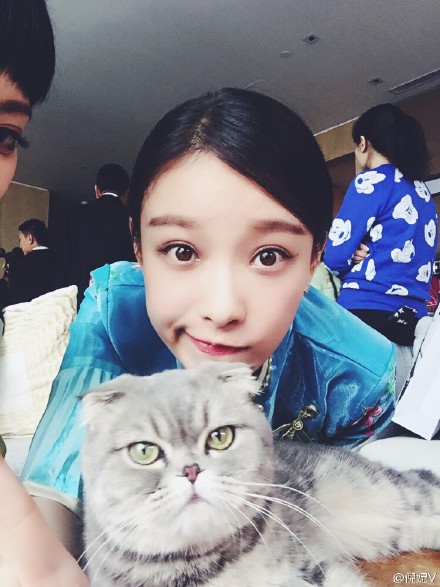 She’s so cute happily posting with Angelabaobei’s beloved cat whose fame is actually comparable to that of Taylor Swift’s Meredith and Olivia in terms of exposure in social media lol! Yup, Angela loves posting photos of her cat too! (not sure if there are videos, but probably not a lot as Taylor does).

If we have bridesmaids who were expected to come,we also have people who we didn’t expect to come. Or maybe it was just me? Either way, it was both of a shock and joy for me!

First up was Lin Chi-ling or better known as Taiwan’s top model and expanded to Greater China as well. Saying that fact, it makes sense now since she works in the entertainment industry as well so it was definitely easy for her to be friends with the couple too . But anyway, I still found it surprising!

What’s even more interesting was that it was her who caught the bouquet (no, not my Jerry please haha!). Her photo captured during that moment on the top left with Ruby Lin is just priceless! She’s already in her early 40’s but still no luck with her love life so the Chinese entertainment loves to call her one of the “Golden Left-Over Goddesses” (something like that). Ruby’s also one of the goddesses at 39, while the others have already left them with Fan Bingbing being happily in love with Li Chen and Zhang Ziyi starting a family with Wang Feng.

And here’s my favorite (unexpected) guest: Ady An!

It’s good to note that Ady’s back in her Weibo game after not being able to frequently post like she used to which I suspect that it was because of her best friend Shone’s recent death. This is what she said in her post, ” Fairy tale come true ~ prince and princess together really happy for a long time! Fated [emojis]”. Yup, you got that right! They’ve been together since 2010 with many people expecting them not to last long. Goodbye, haters!

I have my own reasons for making her my favorite wedding guest. 1.) She’s my all-time favorite Taiwanese actress 2.) I didn’t know that she was actually friends with the couple and even close enough to be invited and 3.) She took photos of the beautiful venue below:

Oh what I’d do to be able to get invited to such a beautiful wedding! So thank you Ady for that! At least I can already daydream with a real setting in mind. Haha!

She also posted her photos with other guests whom I wrote about here too! She definitely isn’t close enough to the couple or I would’ve already puked rainbows if ever she managed to have a selfie with Angela. My faves unite! 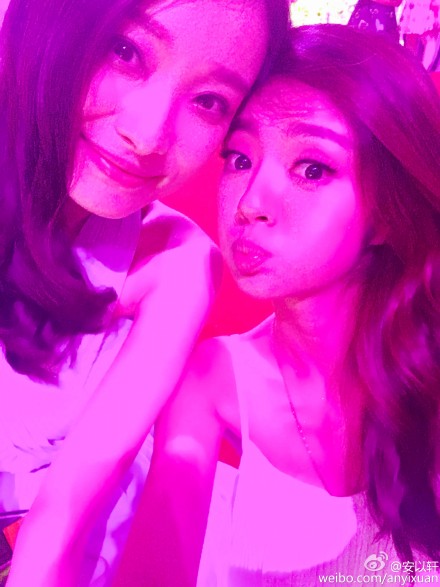 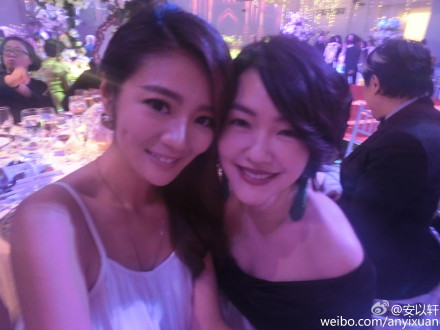 If Angelababy has her Eddie Peng as her groom in an alternate universe, Xiaoming has Zhao Wei. And a lot of people actually ship it for real too that they actually thought that Vicki (Zhao Wei’s English name) would even make a better bride than Angela. Well, it was partly Mr. Huang’s fault for always announcing it to the world before that Vicki has always been his crush even back in their Central Academy days. While the fans have always felt that it was merely a one-sided matter but there was still enough fuel to ship them. Which reminds me, I have to watch “Hollywood Adventures” which was their recent movie just so I can actually understand these BFFs’ chemistry. 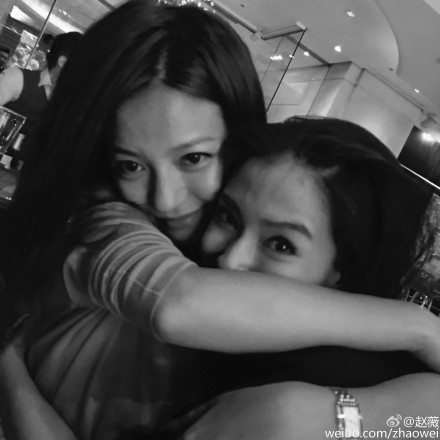 Vicki’s one of my favorite Chinese actresses and I actually loved her as Mulan because she reminded me of Ady An so it’s just cool that my writing about her is right below Ady’s. I can puke rainbows because of this photo! An example of my faves being together in one photo. It’s so cute how these two managed to become close despite people saying that Vicki’s been the reason for the couple’s previous fights. Her caption says, “Love you guys! Be happy!”. So much love for all of them!

What’s a Weibo Update about a wedding without the main leads of the wedding, right? So for one of my last posts, here’s what the beautiful bride said:

She says a big thank you to everyone!  So happy for my fave ❤ While this bride said nothing but a heartfelt thank you, her groom definitely said a lot and it actually touched my heart. Here’s what the dashing groom said:

Just like the end of every event, souvenirs are given and my souvenirs as I end this post are definitely their cute wedding souvenirs: 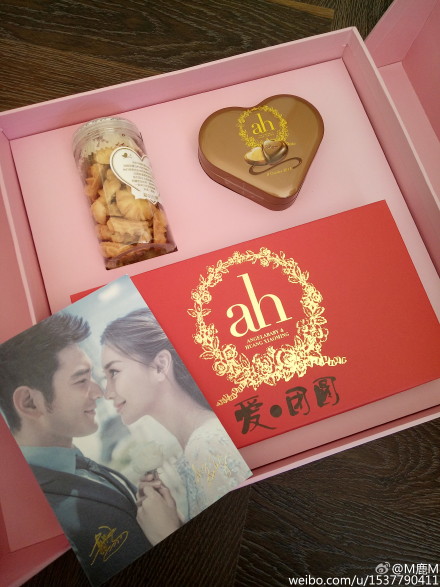 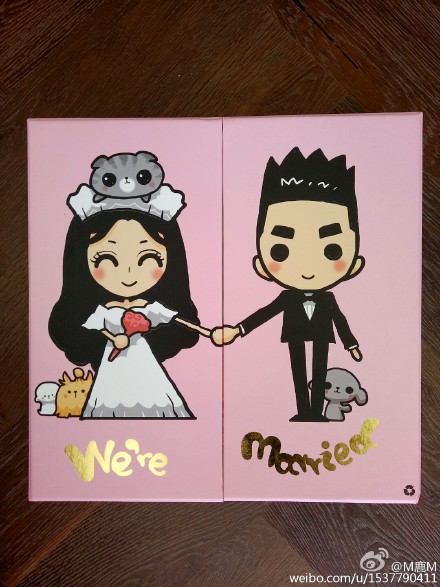 Wew! This was definitely a lengthy post and it was written with lots of love and effort. Sending all my best wishes to Angelababy and Huang Xiaoming!

So what do you think of China’s biggest wedding of the year? Did you enjoy reading as much as I enjoyed spazzing and writing about it at the same time? Haha! Please do let me know through your comments below 😉