[Edit 9/10/2017] I noticed a surge in views for this post these few days. I’m guessing it had something to do with Luhan’s public introduction of his girlfriend, Guan Xiaotong, on weibo. I would like just like to state a disclaimer here: as much as I have shipped the LuDi couple (…gimmicks! Can’t believe I’m still falling for these variety gimmicks even after being such a seasoned viewer!…) in my Keep Running posts, these are all just discussion posts for viewers’ pleasure. I’m happy for Luhan and Guan Xiaotong and would support them (for they are the real couple!) and hope you would do so too 🙂

I don’t usually watch Keep Running but I chanced upon Season 5’s episode 3 the other day and decided to watch it to see how is it like without Angelababy. From that episode, I have jumped to conclusions and am convinced that Lu Han is interested in Dilireba. 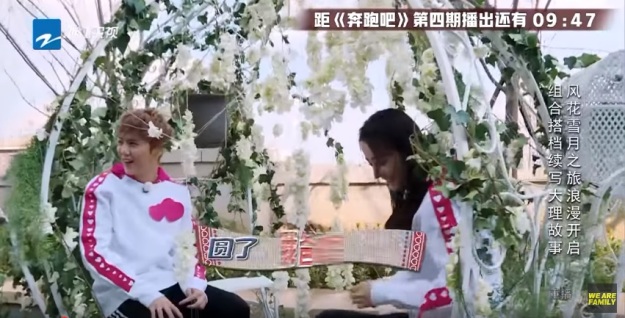 As a frequent viewer of reality shows, I know many people like to say that these are scripted. I also know that the production teams like to force and hardsell ‘CP’s — that is, couples — amongst the cast as a bait topic to boost viewership. I don’t think it’s very ethical but I don’t condemn it either because as an audience, I do like to watch these kind of stuff so I understand where the production team is coming from. They are just catering to viewers’ demands for better viewership. 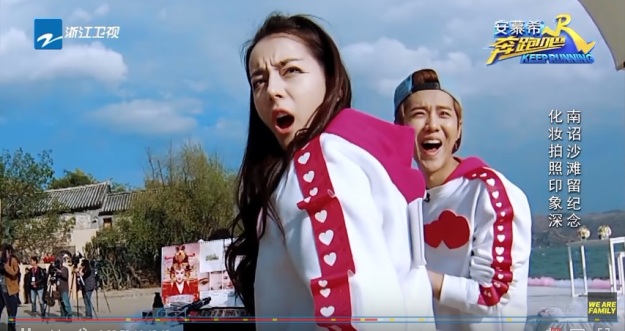 With that said, I also take whatever I see on screen with a pinch of salt, even if it is a reality show. I might enjoy it but I am not delusional. I know that it is a reality SHOW and that there are components of show in it. 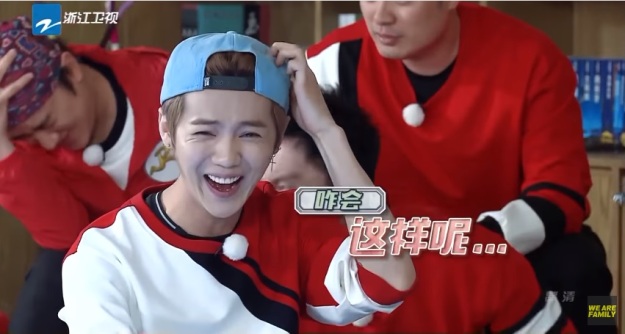 In Episode 3 of Keep Running Season 5, they invited 5 female guests on the show to have a boy vs girl match. One of the component was a heartbeat game. Each team will send out one player at a time to PK with the opponent. To win the game, you need to have the lower heartbeat at the end of five minutes. Basically, you have to try to agitate/scare your opponent to increase their heartbeat while remaining calm. 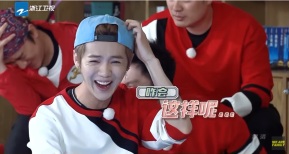 During Lu Han’s turn, the girls team sent out Dilireba. At the very beginning, Luhan’s heartbeat started increasing rapidly from 105 to about 130 despite both parties having done nothing. Seems like someone is excited hehe. Both of them decided to have a silent battle and continued keeping quiet but Luhan’s heart hit 150. The guys team were all asking what Luhan he was thinking about to be this excited. Whereas, Dilireba’s heartbeat had gone down and was only at 100.

The guys team decided that such a strategy would not work and they would have to start attacking. Luhan, being one of the youngest and most handsome male on the team, had loads of charm to spare and he planned to make use of that. His strategy is: to go near. Dilireba’s heartbeat slowly went up to the 110s but instead of letting him lead the game, Dilireba counterattacked and took the initiative to go closer to Luhan, scaring him and made him move backwards. Seems like Dilireba is still in control of the game.

Deng Chao and the rest then decided to tell him to start messing with Dilireba. Start by removing her cap, pulling her hair tie and then it escalated to more nonsense like erasing her eyebrows and removing her make up. After saying all this, Dilireba’s heartbeat indeed rise. Hence Deng Chao said, “Go! Mess up her fringe!” So what did Luhan do? Mess up her fringe? I guess you could consider it that… He rubbed her head gently and fondly, just like a drama male lead. He then used a finger to lightly push her head, another move copied off an idol drama, but Dilireba’s hearbeat still remained in the 120 range. 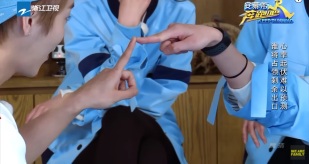 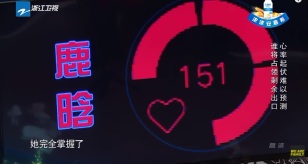 Then, Dilireba counterattacked. She stuck out her index finger, like ET. Luhan was like, “oh what’s this?” and he joined his index finger to hers. Luhan’s heart beat rise up to 149. 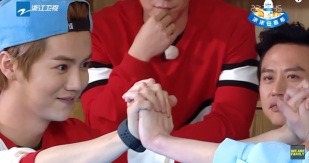 Dilireba then continued with her attack and faced both her palms to Luhan. Luhan accepted the invitation and they stayed in the high-five position, palm-to-palm. Luhan decided to up the game by grasping her hands with fingers interlocked. Dilireba, whose heartbeat exceeded 130 for the first time, is not one to be trifle with as she suddenly release the pressure she put on and made Luhan fall towards her direction.

Luhan’s heartbeat hit 161. Contrast this with Zheng Kai’s heartbeat which started off at about 70.

Lu Han then continued with his strategy of going super close to Dilireba and adjusting her hair. Dilireba’s heartbeat slowly increased from 100s to 130s while Luhan’s was still at 150. 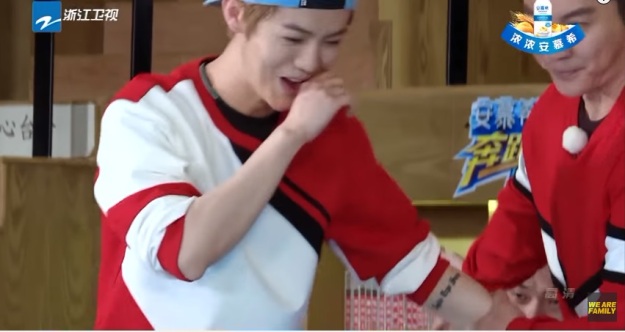 There were also many other instances where there are traces of ‘love’ between Luhan and Dilireba. For instance, after the heartbeat game ended in a tie, there was an additional final match. The male team was considering between sending out Zheng Kai, whose heartbeat never exceeded 100, and Li Chen. Amidst their discussions, the female team decided to send out Dilireba. Seeing that, Luhan immediately stepped up to the challenge despite objections from the rest of the guys.

At the end of the episode, the guys member also had to choose a female member to pair up for the couple match next episode and Luhan picked Dilireba. Netizens have also pointed out that Luhan and Dilireba had secretly held hands unnecessarily in that episode. 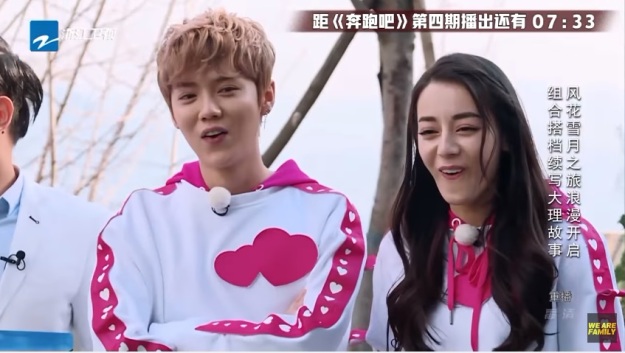 In episode 4, the couples also had to choose between two challenges: one was the cable car challenge while the other was a bicycle challenge. Dilireba wanted to pick the cable car challenge and Luhan agreed without much hesitation even though he was afraid of heights. It was until the rest of the members expressing concern that Dilireba decided to changed to the bicycle challenge instead. To me, it felt like he was a male eager to show off in front of his potential female mate. The rest of the other instances might have been forced, but I felt that this particular one was genuine.

Of course, even if all these were set up by the production team, I still hold the belief that heartbeat can’t be faked. The agitation and excitement Luhan had while trying to be Dilireba’s idol male lead is real. And this is why I think Luhan is interested in Dilireba.

I can’t say the same for Dilireba since she seems to be pretty composed. And this is why I like her even more now. I saw her in Eternal Love (3L3W10MPB) and Pretty Li Hui Zhen and was pretty fond of her because she is gorgeous and yet she is willing to become ugly for a role. I’ve never really liked fangirling actresses (it’s a personal preference) so seeing that Dilireba did not fall to Luhan’s chams immediately is a plus from me. I guess it is not too surprising since Dilireba is used to working with all the charming faces (such as Vin Zhang and Peter Sheng).

Apparently, there have been a backlash on Dilireba for ‘seducing’ Luhan though. I do not understand because from what I see, it seems like Luhan is more interested in Dilireba than she is in him. It helps that the impression Dilireba gives me until now is good. Most of these backlash comes from overenthusiastic (and overpossessive) fans of Luhan. 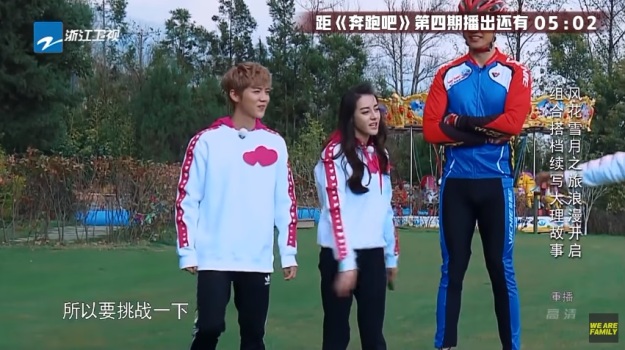 Even though I think there are chances of Luhan and Dilireba getting together in the future, I won’t be a crazy shipper because that is just a burden to the stars. (Of course, me alone won’t make any difference but when a lot of individuals are added together, they do form a considerable voice, just like those bashing Dilireba and Luhan.) With that said, I would still be one happy passer-by in the future if they do get together because.. who can resist such a gorgeous pair?

PS: This blogpost is purely my own personal thoughts, please don’t attack me/this blogpost for being a delusional fan/annoying hater.